Into the Dayara – Prologue

Close your eyes and think of the most scenic place you’ve ever visited. Done? Great! Now forget all about it and go visit the breathtaking Dayara Bugyal in Uttaranchal, India. Don’t stress too much if you can’t though, I’ve got you covered with plenty of photographs to satiate your wanderlust. With lush green meadows meeting the snow capped Himalayan ranges at the horizon, the place is nothing short of a heaven on earth. For the restless soul of the travelers who might be reading this, the image above provides a glimpse of what’s to follow in the second part of this post:

For now, let’s start with some background to the story, shall we?

The Journey:
I wanted this journey to be totally unplanned; the intention – to experience whether the adrenaline rush of an unplanned trip was rewarding enough to bear the discomfort it’s haphazard nature. I didn’t book any hotel rooms anywhere, started with no return tickets or preset return dates whatsoever, things were starting to look interesting. By the end of the trip I had traveled over 6000 km, spent nights in 5 different cities and in an abandoned hut in Barsu (village), made many unique friends along the way, saw random acts of kindness and fistfights on the same day for the same reason, changed my destination thrice on a whim, traveled with ticket, without ticket, in first class and in general compartment with hardly any space to stand, an experience I’m not very keen on having ever again.

To reach the base camp, one may either start from Dehradun or Rishikesh, and take a shared cab (avoid govt. buses) to Uttarkashi to commence the journey. From Dehradun, the shared cabs start from a place called Rispana-pool and shouldn’t charge you more than Rs. 300 pax for the 175KM journey. The road will be a nightmare especially to those prone to motion sickness, find a window seat and go to sleep. Once in Uttarkashi, arrive at Bhatwari either by requesting the cab driver or finding another cab for the journey. There are numerous shared cabs moving in between Barsu and Bhatwari throughout the day. The entire journey should take about 7 hours, but landslides often end up creating traffic jams so it may take much longer.

Barsu Village, the base camp for my trek, with a backdrop of the majestic Himalayan mountain ranges, the surrounding virgin forests and little pollution of any kind, has to be one of the most picturesque villages in India, poetic even!

As beautiful as the place was, the effects of not planning it out properly were starting to show. Unfortunately for me, Barsu has only one place a visitor may rent a place to sleep in, the local GMVN (govt. guest house). I didn’t foresee any problems as my trip was intentionally scheduled during the off-season, and they usually have plenty of rooms to spare. However, as
my luck would have it, a group of about fifty had moved in a day prior
to my arrival to practice yoga in the tranquil village and booked out
all the rooms in GMVN.

Left with no options, I started looking for refuge in the village and found
an abandoned hut right before the village entrance. It even had a couple
of broken beds and a mattress I dared not to sleep on. 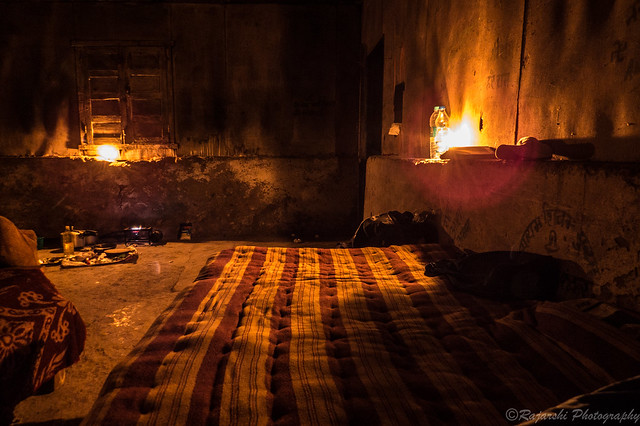 I had already rented some utensils and stoves from the nearest town, and procured a couple of candles from a few curious villagers who were peeking in from time to time, curious of all the activities going on in the abandoned place. I quickly cooked up my dinner, and was all set for an early morning start the next day.

As it usually happens with me, three dogs showed up at the broken doorstep and decided to move in with me for the night. I didn’t mind at all! Anyone who knows me would tell you, I usually make friends with more animals than humans in most of my trips, I had to cook them some extra meal to win them over though. The smallest one amongst the three took his place on the bed, and the other two made themselves comfortable in front of the entrance. I had a sound sleep knowing that my valuables were in safe paws for the night.

Although the temperature dipped at night, I had a sound sleep in the sleeping bag with a few layers of clothing to keep me warm. I woke up early in the hopes of catching a beautiful sunrise, instead ended up chasing
after a few birds I have never seen before. The place is heaven for any
birder or wildlife enthusiast, and for the creatures themselves I guess.
After an hour of chasing them around, I was back to my private villa
and had a heavy breakfast with my three friends who kept me company for
the night. I was packed and ready to leave by seven after bidding good
bye to two of my friends, one of them tagged along with me for the
journey. The journey so far had been nothing but exhilarating, sure
I had a few hiccups along the way, but I wouldn’t have it any other
way.

Of course the uphill trek wasn’t easy with almost fifteen kilos on my
back, but I had all the time in the world and the unfathomable beauty of
the trails made it a pleasure to be there even while I was resting. My
partner in crime would patiently wait by me, taking a power nap every
now and then while I appreciate the nature’s creation.

I remember sitting there and thinking about these lines from Henry Davies,  lines which are always there with me during my travels, constantly reminding me not to rush to the destination:

Things to Carry on a solo trek:

This site uses Akismet to reduce spam. Learn how your comment data is processed.